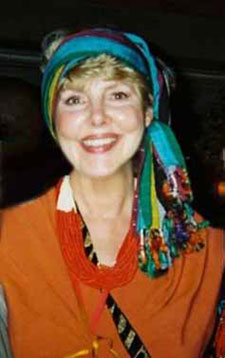 “Today’s global carbon budget is largely influenced by the activities of modern hominids. Carbon dioxide is produced when coal, oil and natural gas are burned; carbon atoms from these fuels combine with oxygen in the atmosphere, where they retain the heat of the earth. The stunning increase of carbon in the atmosphere led scientists to predict a massive warming trend on earth -the so-called greenhouse effect. One of the results of the warming trend would be the melting of polar icecaps, with substantial increases in sea level around the world.”
From The Hominid Gang, Behind the Scenes in the Search for Human Origins

In 1995, she profiled architects and scientists inspired by natural forms:

“Drawing blueprints from nature is yet another argument for biodiversity, since the unknown and untested may be just as useful as silk… So far this sounds like a manifesto of common sense, ghosted by Al Gore. Yet most of us are as rigid in our thinking as our buildings reflect, recycling is thick with bugaboos, and it’s difficult to propose reinventing the wheel as long as gasoline is cheaper than bottled water… In this era of diminishing natural resources and gargantuan waste, nothing could be more timely.”
From The Sand Dollar & The Slide Rule: Drawing Blueprints from Nature

Beyond her work as an environmental journalist, Delta Willis devises media strategies for conservation issues around the globe. At Earthwatch, she promoted the work of 130 scientists, including cheetah conservationist Dr. Laurie Marker; Dr. Meg Lowman, a leader in rainforest canopy research, and Dr. Pat Wright, pivotal to lemur conservation in Madagascar. At the National Audubon Society, she set record media results, pioneered the organization’s entry into Social Media during the BP oil spill in the Gulf, and highlighted the work of Audubon scientists, including Dr. Stephen Kress, who founded Project Puffin.

The epic “Year of the Wildebeest” featured stunning aerials of the great Serengeti migration, captured from a hot air balloon used as a filming platform by Alan & Joan Root. Shortly after Joan Root became the first woman to fly a balloon over Kilimanjaro, Willis found herself climbing inside the gondola to float across Kenya’s Maasai Mara. The experience led to her first magazine article, for Adventure Travel, and in 1981, a profile of the Roots in PEOPLE magazine.

More articles were published in Audubon, Outside, Natural History, and The New York Times invited her to review a biography of Dian Fossey (Some Primates Weren’t To Be Trusted – New York Times.) For two decades she was the chief contributor to Fodor’s Guide to Kenya & Tanzania, and also wrote the Fodor’s Guide to the Seychelles and Arkansas. This research led to over 100 safaris and vital fact-checking such as the bar hours at Peponi’s in Lamu.

A member of the Explorers Club, Willis crossed the Sahara for a London Zoological Society/WWF expedition which led to the establishment the largest nature reserve in Africa. When China first opened to American travelers in 1979, Lindblad Travel recruited her to guide their travelers for 30-day tours. She organized the first expedition to East Africa for Harvard professor Stephen Jay Gould. En route to Nairobi, the evolutionary biologist served as her guide to the home of Charles Darwin, now a museum, near London. She organized custom photo safaris working with Pulse Africa, based in Johannesburg.

Interviewed on NPR’s “All Things Considered,” and “New York & Company,” Willis lectured by invitation at The American Museum of Natural History, New York University, The Explorers Club, The 92nd Street Y, and the Fulbright Institute.

Her memoirs, “Sundowners” begun when her base camp was a houseboat moored on the edge of Manhattan, transport us to her world in Africa. Since 2016 she has lived on the edge of a giraffe sanctuary in Kenya, where she photographed birds and observed life in a “pond worthy of Monet.”

For five years she served on the editorial board of Swara magazine, the journal of The East African Wildlife Society. Her magazine column Portfolio featured artists, photographers, sculptors and filmmakers, including profiles of Karen Laurence-Rowe, Sophie Walbeoffe, Terry Matthews, Jonathan & Angie Scott, and filmmakers Mark Deeble & Victoria Stone. Her feature on “Whale Watching in Watamu” celebrated the coincident annual migrations of wildebeest and humpback whales to Kenya, subsequently promoted by Kenya’s Minister of Tourism. “Secrets of Sand River” revisited the Maasai Mara for Travel Africa magazine. The scholarly publication Pachyderm requested she author a tribute to Richard Leakey.

“Richard Leakey was often photographed holding skulls of human ancestors, but during my first visit to Koobi Fora in 1982 he carried a fossilized elephant skull. The heavy discovery sat behind us in his single- engine Cessna. Lumbering down the strip, kept a short 468 yards to discourage visitors, the wheels lifted at the very end, brushing pale grasses. Leakey liked to press his luck, to confront challenges cocksure, and this worked well for the better part of his extraordinary life….”

Below, Delta Willis traveled to Papua New Guinea to report on birds of paradise.