Rules of the Bush Delta Willis

An American man who taunted a bison in Yellowstone National Park was sentenced to 60 days in jail and banned from the park for 5 years. In September, 2018, a German woman was trampled by an elephant near Mana Pools, Zimbabwe, after she left her vehicle to get a closer look. 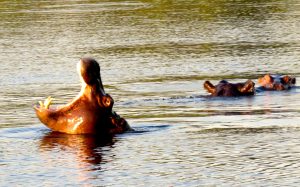 Visitors put themselves in danger by not knowing the rules of the bush. You can’t expect to become an expert on wildlife behavior overnight, and even experts with decades of experience will tell you an animal’s behavior is not always predictable. So before you go, read the rules carefully, even if you are on a guided tour, and especially if you are traveling independently.

In most national parks and reserves in Kenya it is forbidden to leave your vehicle except in designated areas, or travel with an open-top vehicle. The open-top rule may seem spurious, but big cats can be overhead in trees, and cheetahs have been known to use a vehicle as a perch. Some park roads take you close to rocky outcrops where big cats like to rest in the shade or survey for prey.

Sunroofs for most vehicles allow you to photograph but still give you cover overhead. If you rent a vehicle with a canvas top that you remove, in certain countries and parks, you can be fined or ousted from a park. Open top vehicles are used in Southern Africa. A friend who just returned from the Kalahari complained of being baked. More travelers suffer from sunburn than any other peril, but this blog will give you an idea of the reasoning behind the rules most people read in a hurry or not at all. 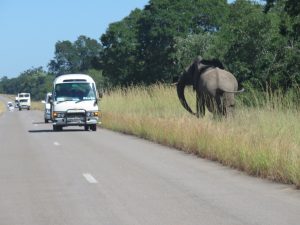 Observe speed limits (30kph) do not interfere with a hunt, and use a telephoto or zoom to get closer. ?Do not press closer than 20 meters; annoyed cats may leave and return later to move the carcass to another site. Worse, a lioness moving her cub was surrounded by vehicles in Nairobi National Park. Visitors did not know she left two other cubs hidden in the grass, or that male lions sometimes kill cubs in order to make females come into estrus again. She became stressed, and when a KWS ranger tried to tell visitors to give her some space, they complained they had paid good money to get close, perhaps not knowing they were endangering what they had come to see. Be respectful of rangers, and wildlife.

Also, if a lioness has cubs, and visitors flail arms about from vehicles, she may view you as a threat. Do not extend yourself out of the roof or open the door to get a better shot; under no circumstances should you climb out of the vehicle or get on the hood.

Animals in popular parks have learned to disregard a vehicle that poses no threat to them. They may have quite a different reaction to the human form. This is especially true of lions and elephants which have been harassed by humans, or a mother with young.

Some tourist vehicles interrupt a chase or foil a kill by crowding cheetahs or lions as they stalk prey. Do not race along side or rush toward the “scene” (what you guess to be the kill site or prey.) Instead view it from a distance with binoculars or through your telephoto. Some years ago, vehicles interrupting chases became so abusive in Nairobi National Park that cheetah became dangerously lean during the tourist season. (An August, 2018 game count recorded not one cheetah.) ?There’s no way to predict which way the chase will turn; you may hit and kill one of the animals, for which you can be banned for life from the park and fined, and your driver will lose his license and his job.

In parks like Amboseli where vegetation is fragile, driving off the park road is forbidden. You usually receive a list of park rules when you pay your entrance fee. Adhere to them carefully. Breaking the rules can result in a fine or being banned from the park. It doesn?t take an official warden as witness; if you see bad behavior, record it 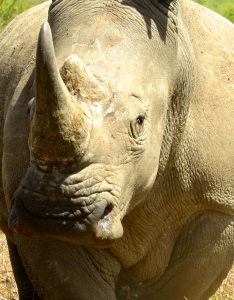 3. DO NOT REPORT LOCATIONS OF ENDANGERED SPECIES ONLINE

If you post on social media, do not report locations of rhino, big tusker elephants, or bird nests, especially owls. Delay your post by at least 24 hours, and be vague. Poachers troll; a 2017 National Geographic report inspired offers of illicit trade in the comment section.

4. DO NOT FEED OR TEASE WILDLIFE

Baboon and monkeys have been known to snatch food from travelers eating at a picnic table. Do not tempt them, and take your leftovers to dispose of in trash bins. Keep the windows of your vehicle up when near wild primates. Do not keep food in your tent, especially if you are in it.

Some people bang the side of the vehicle or whistle to get an animal to turn their way. It’s not a good idea, and you may endanger other people in your group. Annoyed rhino and elephant have been known to charge vehicles. You will find it more rewarding to sit quietly and simply watch. The longer you stay and whisper, allowing animals to ignore you, the more natural behavior you are likely to see. Patience allows you time to study the light and anticipate a great photograph.

Do not throw trash, plastic bottles, or cigarettes out your window. Organize a system inside your car and dispose of in a bin or recycling unit near park gates.

Hippo are faster on land than you might think. Should you come between them and water, they can attack, or simply run over you to get back to their safe haven. Better camps and lodges provide an escort to walk you back to your tent after dinner. ??Stay in shallow waters when canoeing or boating, giving hippo the freedom they prefer in deeper waters. You may still encounter the occasional rogue (which also happens with bull elephant) or the injured, ticked off because they?re in pain. These are times when your local safari guide is golden. They often know animals individually, and can steer you away from dangerous ones.

Even experts in animal behavior have close encounters. Joan Root had her face mask ripped off by a hippo when filming at Mzima Springs, the tusks missing her eyes by millimeters. The hippo, fresh from a losing battle, may have taken her diving bubbles for a sign of his rival. Alan Root didn’t get off so easily; the same hippo bit his leg, which gave fodder to George Plimpton’s New Yorker profile “The Man Who Was Eaten Alive.”

To photograph hippo, use a blind, a telephoto, or shoot from a vehicle.

Walking safaris can only be conducted in certain areas. Walks may be as brief as an hour or you may traverse 10 miles a day, with tented camps en route. Walking is an opportunity for a different perspective, but it requires agility of body and mind. ??You may laugh at instructions given beforehand: “If a buffalo or rhino charges, climb the nearest tree!” But if you are unable to climb a tree, you should think twice before going. You may not only put yourself in danger, you may cause an unnecessary killing of an animal.

Led by a naturalist who knows how to identify spoor, a walking safari may also include a gun-bearer, for there is the odd chance of surprising a rhino or buffalo. However, a weapon can provide a false sense of security, so be alert, be nimble, and spare the bullet. 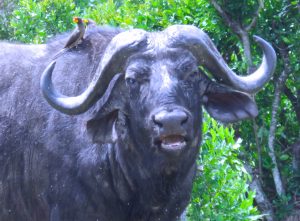 Buffalo appear to be docile creatures when viewed from a vehicle, but they do not like to be surprised. One visitor, going for a stroll after lunch in the Maasai Mara, was fatally pinned to a tree by a buffalo. A traveler who went for a jog was injured by an elephant calving on the same trail.

According to some wildlife experts, the most dangerous creature in Africa is one that is half-tame, half-wild. Consider the attacks by lions at Kora on their very people who fed them.

Baboons can do a lot of damage with their canines: the best defense is to yell and back off. Keep your face to the animal and drop your camera away as you back away. With some animals (like elephant or lion) throwing up your hands and shouting may scare them off. Ultimately, you must signal by body language that you do not intend to pursue them further. Never tempt animals with the opportunity of a chase.

Many visitors assume that they will be able to go on their daily jog while on safari, but jogging anywhere in the bush is not smart. Lion, cheetah, and leopard are big cats, and cats like to chase things.

Rules of the Bush could fill a book, but the best rule of thumb is to remember that in any wild terrain, you are an intruder and out of your element. Wildlife deserve your respect for many reasons. Some endangered species, like rhino, have been on this earth far longer than humans-40 million years. At best, our kind has been here 4 million, but our numbers invade wild spaces on every continent. Treasure your chance to see these creatures. Your visit can help protect them. Be kind to wardens and rangers; many risk their lives, working for low pay in tough conditions. Be a solution, not a problem.

DELTA WILLIS worked with wildlife filmmakers for the British television Survival series. As Editorial Consultant for the Fodor?s Travel Guides to Kenya & Tanzania, she learned from top guides on over 100 safaris. A member of The Explorers Club, she participated in scientific expeditions, including a geological survey of Lake Turkana, and tracking man-eating lion descendants in Tsavo National Park.