Rollers Are Bigger in Botswana

Rollers Are Bigger in Botswana 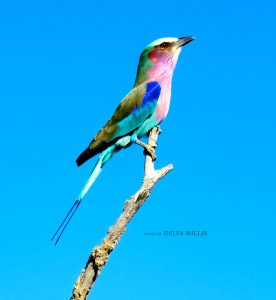 Lilac-breasted rollers have reigned as my favorite African bird since Joan Root handed me a few mealworms. The setting was Kenya’s Lake Naivasha, where the naturalist maintained a long wooden box, resembling a coffin, on her verandah. Inside were worms to feed glorious birds that knew to show up at tea time: African crowned cranes, love birds, Superb starlings, and the exquisite roller. Some caught their meal midair. The roller was shy but enticed by worms inside my hand.

From the Maasai Mara to Tanzania’s Ngorongoro Crater, I tried to photograph this brilliant bird, flashing even more color in flight. The roller name comes from a high dive that is part of a courtship display. Flying up for 10 meters, it then seems intent on a suicide dive bomb, falling towards the earth with closed wings. At the last minute, it flaps, gaining speed and altitude. Now flying very fast, it rolls to right and left 4 or 5 times in a couple of seconds, like a pilot saying farewell with a dip of the wing. Swooping up, it repeats the show. Hang around: this species actually breeds on the wing. Alone or in pairs, they perch high on the limbs of dead trees or termite mounds, but seemed too busy to pose. I got one or two nice shots, but I wanted to see distinctly what I call its whiskers, an elegant subtle necklace of contrasting feathers. 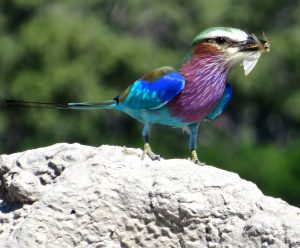 In Botswana, I got a dozen chances. The first photo op was near Ngoma Safari Lodge in Chobe National Park, where a roller patiently sat within a few meters of our vehicle. But something was wrong with my camera; my auto focus failed. I could tell my zoomed in images were blurred, but kept shooting because I knew the bird would fly before I figured out the problem. Nothing made sense because we had already encountered elephant, a beautiful sable, all in crisp focus, plus giraffe parading by a giant baobab tree. 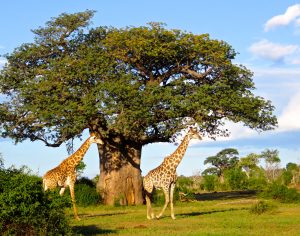 Back at the lodge, enjoying a South African Chardonnay while sitting with a view of floodplains across to the Caprivi Strip, I saw that my camera setting for auto-focus was slightly off the mark. Easy thing to happen on bumpy roads. I nearly wept; it was my fault, not the Cannon’s, and I feared I would never see a roller pose like that again.

But it was early in my safari, and for the next week, rollers were everywhere. They were not in a hurry, and posed. One caught a moth, then posed (above.) Another serenaded me with its call, a raspy rak rak rak, which I got on video. Sometimes, birders talk about “lifers” meaning seeing a bird for the first time in their life. My photo safari to Botswana was a lifer for me, being able to capture the exquisite Lilac-breasted roller, in focus. Rollers are not really any larger in Botswana, but I got closer, and perception is everything. 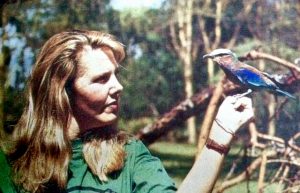