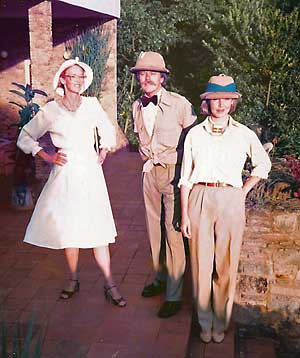 Joan Root, left, Air Kenya pilot Doug Morey, and the author, Delta Willis, dressed to attend the Nairobi premiere of Out of Africa.

In that sweet drift between waking and sleeping, I glimpse an African crowned crane dancing outside my bedroom. Wings spread, he bows then pecks the window pane. So ends an afternoon nap, but I wake in a dreamy setting, on the shores of Kenya’s Lake Naivasha. Late afternoon light renders this landscape Gauguin Green. Grass is neatly trimmed by hippo. I spy an antelope, a family of mongooses, lovebirds, but the crane superimposes himself, ready for his close-up. With a golden headdress, and the enthusiasm of the randy, the bird is splendidly confused.

“The crane is courting his own reflection in the window,” said my host. It was typical of Joan Root to merely state facts, with no aside on narcissism.

“He’s been at this for some time,” her voice wavered when she added, “I need to find him a mate.”

I raise a New Subject, pulling out maps to plot our safari north to the Mathews Range and Samburu Country. Joan Root would be my own personal David Attenborough, with unpublished insights on mammals, birds, botany. When I introduced evolutionary biologist Stephen Jay Gould, by the end of dinner, the Harvard professor was asking her questions.

“I’m getting into grasses,” she told me after a stint in the Serengeti, where she kept a log of when certain plants came into seed, when species of antelope calved, how these coincided with the rains. “You could produce a beautiful book,” I encouraged her; “You?ve got the photos, and this is a great angle. Nice combination of art and science.”

“I’m not so ambitious.” Modest, retro, Joan’s career blossomed in the shadow of her mate. Alan Root had enough ambition for an entire round table at Elaine’s, and once at the celebrity hangout in New York, emitted the hoot of an Alpha male baboon. More… 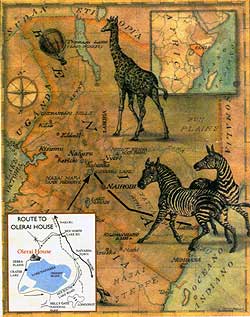 Imagine gliding among pelicans on Lake Naivasha, as an African fish eagle gives a haunting call from the top of a yellow barked acacia. Tea is served on board with delectable brownies, and on your return cruise, the setting sun paints the horizon gold, while Mt. Longonot turns a darker shade of purple. Oria Douglas-Hamilton has transformed her parents’ home into a dreamy retreat, with enchanting rooms, truly fresh food from the farm; (the largest grapefruit I’ve ever seen, plus the best yogurt-homemade.) This is a place to feel at home in Africa. Birds are everywhere, and hippo saunter on shore at night to mow the lawn.

The last time I saw hippo at Lake Naivasha, they were silver blimps that glided beneath a full moon. It was New Year’s Eve, and a friend and I were walking from one lakeshore home to another, talking and giggling louder than usual, to warn the hippo that a couple of hominids were afoot, which sent them running in a meander that ended with splash after splash. Better than fireworks, in my view.

You have probably heard that hippo are the most dangerous animals in Africa, and this is why: They feel safer in the water, where they can submerge and hide. Don’t become between them and their safe haven.

3) How to Watch Elephants

In 2013 I introduced Kenya conservationist Paula Kahumbu to Hillary Clinton who worked with the Wildlife Conservation Society to pull together $80 million to protect elephants in Africa. The gathering at the Clinton Global Initiative in New York also welcomed Jane Goodall and Iain Douglas-Hamilton. The initiative followed marches in and petitions in London and New York, and a meeting of wildlife filmmakers in Jackson Hole. I attended them all and am proud of the awareness that we built. Threats beyond ivory poaching remain, namely a growing human population with goats and cattle that compete for water and grasslands, human/wildlife conflict created by people’s gardens on elephant territory, and pro-ivory trade advocate who quipped about elephant population in Kruger, “Where are the poachers when you need them?” Get the poachers other jobs, said Chelsea Clinton.

I Dreamed of Africa 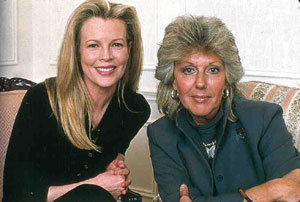 Kuki Gallmann’s ranch, located in Kenya’s Laikipia region, included The Mukutan Retreat, named after the Mukutan Gorge, where a series of canyons converge. Spacious cottages decorated by Kuki were featured in Architectural Digest, as were her designer Sultan tents at Makena’s Hills, with a view of Lake Baringo. In 2017, her dream turned into a nightmare, when armed cattle herders invaded Laikipia. Kuki was shot in the stomach, and Mukutan Retreat burned to the ground.

Kuki Gallmann’s I Dreamed of Africa, reprinted in 17 languages.