Paradise on the Indian Ocean Coast

Paradise on the Indian Ocean Coast 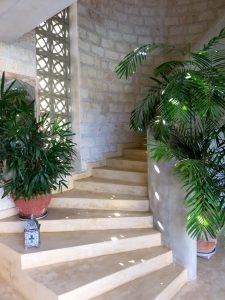 On the east coast of Africa there is a home near Malindi that sparkles with fossils of ancient life. The walls are blocks of coral. In this land where humankind began, these tiny sea creatures long dead are given a second life with every rising sun that emerges from the Indian Ocean. The house glows from within, as does its owner.

Yolanda McIntyre, a designer whose interior renovations included a London flat for royalty, created this shimmering home by following one of nature’s best examples: Less is More and nude even better. Instead of plastering walls, she left the limestone exposed. The pink hue is pleasing to the eye, as soft as the sandy beach seen from the master bedroom upstairs.

On the horizon one can see ancient wooden dhow boats, and in the sky, colorful kites that dip and swirl as surfers speed across this beautiful bay called Shale. Twenty minutes from Kenya’s Malindi Airport, the romantic retreat is rented privately to families and friends of friends. In Yolanda’s world, this network stretches from Malibu to Africa, with London in-between. I found this elegant castle, called Coco Loco, to be the perfect escape from a brutal winter in New York, a place to unplug. There is no TV but if you insist, there is WiFi for Netflix and the news. Better yet, a rooftop garden for watching the stars.

Solar panels hidden on the roof collect power from the equatorial sun, allowing the palace to be lit at night, powering 2 fridges and fans in each of the 4 bedrooms. Inspired by designs in Morocco, the pool in the center of the house has its own solar-powered pump; with open skies above, it sparkles continuously as if to compete with the fossils. At night, swim on your back to commune with the stars.) 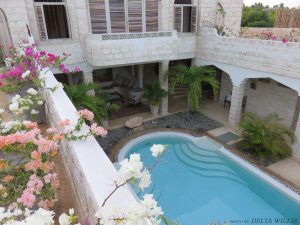 An efficient ‘Biorock’ system treats black and grey water with enzymes to break down waste; treated water stored in tanks used to wash cars or water gardens, a pocket of green during East Africa’s dry season. Rainwater is collected from flat roofs, flowing into storm water pipes to fill 8 tanks buried in the sand around the house. Up to 12,000 liters can be held for showers, kitchen use, and watering trees and plants. As a back up, a well is maintained, plus the two car garage has slanted roofs feeding smaller tanks, allowing another 4000 liters of fresh water.

Private guests at Coco Loco can delve into living coral gardens in the Indian Ocean, with a wealth of red snapper, dolphins, shorebirds and classic wooden dhow vessels. Kite sailing is popular on this shoreline because of long stretches of water without rocks or reefs. Below one of the dreamy bedrooms, with private bath. 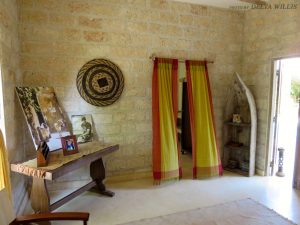