This luminescent parade of silver hippo was enhanced by my discovery, earlier that day, of Dom Perignon in my host?s pantry. This is what life was like for me on Lake Naivasha; I?m digging for chutney and I find a case of champagne. Imported for Balloon Safari voyages, the bottles had remained unopened for 13 years. I phoned the owner of Naivasha Vineyards, who said, ?There?s only one way to find out if it?s any good, Delta. Bring a bottle tonight!?

With a chilled bottle wrapped in a sarong, I walked across rows of lettuce in the garden begun by Jack Block, one of the founders of Block Hotels, including the legendary Norfolk in Nairobi. His widow Doria had invited a small group of friends to the house where Robert Redford retreated during the filming of OUT OF AFRICA. That?s enough name-dropping to send anyone?s cork flying.

The lake attracts the luminous for good reason; it is peaceful, private, and immensely beautiful. One of the features that make it so attractive is the African fish eagle, which cocks its head back before delivering its haunting call. The lake is also home to malachite kingfisher, goliath heron, and elegant yellow barked acacia trees. 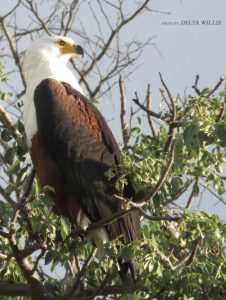 Oria?s family home, Sirocco House, is bordered by tall cypress and pepper trees, plus 3,000 acres, including the waterfront. A few years ago Oria created guest cottages known as Olerai House and began to entertain visitors with gourmet picnics. ? There are hikes to the Crater Lake rim, first-class bird watching, horseback riding nearby. But what you really want to do with the Douglas-Hamiltons is watch elephants.

I met Oria Douglas-Hamilton and her husband Iain in 1975 when promoting a documentary about their research on elephants. The two lived among the herds at Lake Manyara Park in Tanzania. Iain?s method of naming individual elephants by ear tears, the shape of tusks, and other identifying marks proved useful to one of his assistants, American Cynthia Moss, who went on to her own pivotal research. An Oxford graduate and son of the Duke of Hamilton, Iain’s role in the CITES ivory ban was key, and since 1993 their Save the Elephants research has focused on herds in Samburu. Oria and Iain are to my left at the Indianapolis Gala in the photo below. 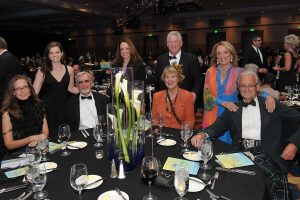 They share their passion for elephants with all who visit Africa. To organize a visit to Naivasha or an Elephant Watching Safari, contact Delta Willis