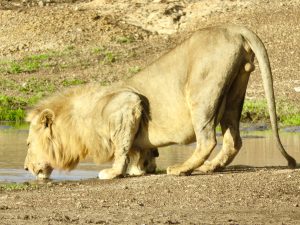 The roar was unmistakable. Three long, deep thundering bellows, followed by three short grunts. Another lion answered. I’ve heard big cats in the Serengeti, in Tanzania’s Selous, in the Okavango Delta, and on my first safari in Kenya’s Maasai Mara. But nowhere is it more amazing than when lions speak from Nairobi National Park.

wonderful both as a guide, riding companion, and conversation partner who patiently and enthusiastically answered all our questions. He even baked banana bread that our youngest son/pickiest eater devoured. A second bonus was that he persisted as the day got late and through a combination of his effort, knowledge, and of course luck our last game drive ended with a highlight of seeing a leopard.

My friend Marzena liked him so much she booked Ernest again for a day trip to Naivasha, to see birds of prey at the sanctuary known as Kilimandege. His 4WD is clean and large, and on request you can have a picnic lunch prepared to spend all day in Nairobi National Park. 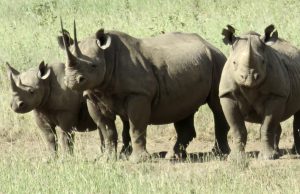 Rhinoceros! This is one of the few places where you can see black and white rhino. A group of rhino is called a crash, which is what happens when you get too close to this near-sighted freight train. So keep your distance, especially when you find a mother with a young calf, though the six black rhino we encountered were oblivious.

So were a large pack of jackal, plovers and African spoonbills, kongoni, zebra so thirsty they waded deep into waters frequented by crocs, and finally, a crash of white rhino. 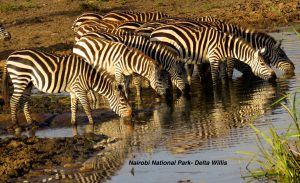 You can see much in only 2-3 hours; bring a spare camera battery. There’s nothing like it, and you will be doing your part to support Kenya’s oldest national park, founded in 1946.

Stay in your vehicle except in designated picnic areas, and give wildlife plenty of room, keeping your car 20 meters distant. See Rules of the Bush

Let Pulse Africa organize your visit to Nairobi National Park, with nearby attractions including the Sheldrick Elephant Orphanage and the AFEW Giraffe Center. Beyond the simple bush cottage at Silole Sanctuary, there is House of Waine, Hemingway’s, and luxurious Giraffe Manor, just beyond the lion’s roar of 115 decibels.  Contact Delta Willis