How to Watch Elephants 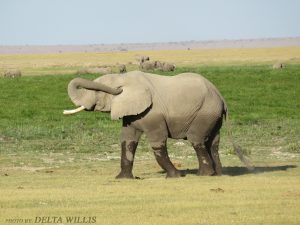 Derek Joubert, who with his wife Beverly filmed “Soul of the Elephant” in Botswana, advises “Buy a good elephant book like Cynthia Moss’s Elephant Memories” and study behavioral signals, i.e. When the whole herd suddenly stops, it may be an example of their infrasonic communication at work. Also watch for any order from the leader to move on, it’s usually silent (to us).”

“You know how when you go to Spain or France, if you know a few words of their language, their world opens up? Well it’s the same with the elephant world.”

Better yet, become an elephant whisperer. There is a new website that translates human words and emotions into elephant talk. Developed by Dr. Joyce Poole and the David Sheldrick Wildlife Trust, founded by Dame Daphne Sheldrick, the resource enhances the expertise in Elephant Memories, written early in Dr. Moss’ nearly 50 years of research at Amboseli.

I once spent Christmas at the Amboseli Research Camp. We were sitting around opening presents when a herd approached, and Cynthia Moss advised us to move to our tents. One matriarch examined the gifts we’d left behind, including a carpet of woven grass that had been rolled up and tied with a bow as a present for Cynthia. With nimble fingers at the end of her trunk, the elephant unfurled it and gave the open carpet close inspection with her trunk, sniffing, then ambled on, perhaps because the grass wasn’t green.

I didn’t capture a photo because I was still shaking after being charged by a young bull. I pivoted into a tent. He was just showing off with a mock charge, but my friend Lee Lyon was killed in Rwanda by a baby elephant that simply put its knee into her chest when she fell to the ground. A baby elephant can weigh a ton. This calf had been drugged and translocated by copter, so it’s behavior was highly unusual.

Dead at 29, Lee Lyon had the courage to go to Africa before I did, and the misfortune to keep shooting instead of focusing on her own safety. Ironically, Lee was assistant to Dieter Plage for the filming of Oria & Iain Douglas-Hamilton’s research on the elephant herds at Tanzania’s Lake Manyara, where Dieter made the same mistake, but not fatally. Working as a still photographer, Lee captured a charging, ears out portrait of the magnificent adult known as Boadecia, plus an equally stunning photo of Oria, holding infant Saba within feet of an adult elephant.

Saba was six weeks old when she met Virgo, a one-tusker who would walk over to greet them when her name was called. Today Saba is known as a television star, and helps run the Elephant Watch Camp in Samburu, northern Kenya, near the research headquarters for Save the Elephants, founded by her father. It’s one of many places in Africa where you can photograph and watch elephants. From Botswana to Zimbabwe, I always find watching elephants a religious experience, these intelligent creatures every move a meditation. Consider coming to to see, and hear, the great trumpets of Africa. I am on my way to Amboseli, where the magic of these magnificent creatures is made all there breathtaking by the snows of Kilimanjaro, which trickle down to create an ideal wetland habitat which elephants and other wildlife prefer. 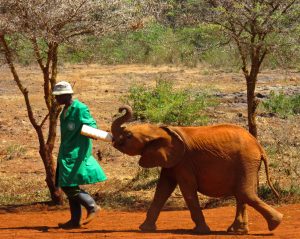 A rescued orphan takes a milk bottle at the Sheldrick Orphanage founded by Daphne Sheldrick. 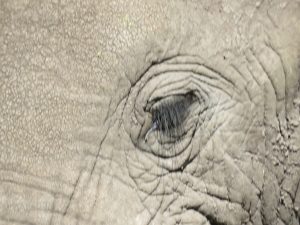