A Vision for Nairobi National Park

A Vision for Nairobi National Park

On a beautiful spring day in 2008, I toured New York’s Central Park with the women who helped to make it beautiful. The founders of Central Park Conservancy were only five strong but combined their skills to mount a campaign to transform Manhattan’s crown jewel, and the first public park built in the United States.

Many visitors do not realize that much of Central Park, beyond the famous outcrops of Manhattan schist, was man-made by the visionary Frederick Law Olmstead, considered the father of American landscape design. Fittingly, it was landscape designer Betsy Barlow Rogers who led the founding of Central Park Conservancy in 1980.

The Conservancy, which now manages the park, set new standards of excellence; now others around the world replicate their model. Beyond cleaning and restoring, the conservancy inspired a lasting legacy, ensuring that Central Park will be a haven for future generations. This includes funding educational programs nurturing the next generation of park stewards. Another outstanding model is African Parks, a non-profit that takes on direct responsibility for the rehabilitation and long-term management of protected areas in partnership with governments and local communities. An example of their success is Akagera in Rwanda.

Last week I toured Nairobi National Park, not for the first time, but with a woman I call The Lion Queen, because she knows every lion in the park. Trish Heather Hayes writes a column about the lions of Nairobi National Park in every FoNNaP newsletter, and patrols in her vehicle once a week to help Kenya Wildlife Service (KWS) curb bad behavior, such as vehicles getting too close to lions, people dangling arms or legs outside a vehicle, or getting out of the car in non-designated areas. We’ve also picked up trash together, escorted by armed rangers. FoNNap members gain comp entry during citizen science projects, which include game counts or pulling up invasive plants by morning, with your afternoon free for a game drive.

While Nairobi National Park and Central Park have much in common: providing lungs for a big city to breathe, both an Important Bird Area as designated by Birdlife International, and a green oasis for residents and visitors, the extraordinary ability to see Black and White rhino is an exception. So are large families of ostrich, herds of zebra, Cape buffalo and antelope, resident hippo and crocodiles, towers of giraffe, plus the chance to see leopard or other spotted cats.

But like Central Park once did, Kenya’s oldest national park has much to repair. Former KWS director David Western lays out a few vital priorities in his upcoming opinion piece for Swara magazine, the journal of the East African Wildlife Society. “Ecological restoration is rightly the central plank of the plan, aiming to restore vegetation health and wildlife populations. Fire and mowing are necessary to reverse woody encroachment, restore habitat diversity, wildlife numbers and, I would add, the resilience of the park to droughts and climate change;” he writes. “Restoration calls for good science to guide management. KWS should engage partners to help with the intensive ecological monitoring the plan calls for. Here I suggest using NGOs with years of experience and contracting universities to use the park for study and research. Finally, upgrading nature trails, overlooks and picnic sites will help reduce the vehicular congestion. Any further accommodation in the park should be rejected.”

On my day in the park with The Lion Queens, we visited several picnic sites, currently closed to gatherings because of Covid restrictions, but essential pit stops for toilets. These choos should be made more sanitary and well ventilated, with running water (made warm by solar power) proper disposal of waste, and built with some flair for design in this ecosystem. For example, in 2013 Serena Hotels won awards for their Amboseli hotel designed like Maasai bomas. Beyond award-winning hotels, The Aga Khan Program at the Harvard Graduate School of Design is dedicated to the study of Islamic art and architecture, and landscape design. Given the remarkable restoration of Zanzibar’s StoneTown, imagine what the Aga Kahn organization could do for Nairobi National Park.

In particular, I think of three sites in the park. One is the Impala Observation Point, which on a previous visit provided a spectacular view of many White rhino below. The Caltex company built a small viewpoint there to celebrate Kenya’s independence in 1963. That should be preserved and renovated, cleverly, with an expanded platform to accommodate more people, perhaps a wide boardwalk that does not require demolishing trees. I leave this challenge to landscape designers and architects, plenty of whom improved vistas at Yellowstone and the Grand Canyon, both on the verge of being loved to death, along with my own former front yard of New York?s Riverside Park. At the 79th St. Rotunda, once occupied by homeless and drug dealers, a magnificent water fountain is being restored; one steps away from the concrete jungle to see the Hudson River, framed by arches. The river, once so polluted sea captains brought their boats to the harbor where barnacles simply fell off the hull from toxic waters, is now so clean it attracts humpback whales. This is the kind of initiative Nairobi National Park needs, not simply to make vistas become breathtaking, but to demonstrate the profitability of good planning and oversight. 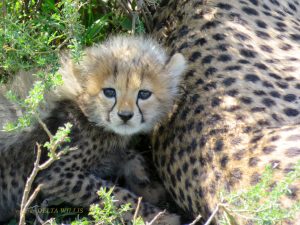 The second location is the NNP Animal Orphanage which could benefit from partnerships with Disney or the Wildlife Conservation Society. WCS, formerly the New York Zoological Society, transformed a small zoo in Central Park, giving the caged animals space and dignity. At the Cheetah Conservation Fund center in Namibia and some zoos, a cloth lure is used to exercise orphan cheetah, going from 0 to 60kph in seconds. It is a thrilling challenge for photographers, and the cheetah gets its exercise. See video

Entrance gates now bottlenecks should be changed to online booking of tickets in advance. With their receipt, the visitor should receive a list of park rules.

The Ivory Burning Site deserves an outdoor museum or monument that inform visitors about the historic moves Kenya made to halt illegal trade in ivory and rhino horn by burning confiscated tusks and horn. It was emotional, it was horrifying, and controversial. I think of Maya Lin, who designed the Vietnam Memorial in Washington, D.C. and recently devoted her attention to endangered species. At What Is Missing.net you can see the potential for interactive displays.

As long as I am dreaming of visions that might be, I would like to imagine strolling beneath the shade of Acacia geradi to arrive at a statue of Esmond Bradley-Martin, who devoted much of his adult life to exposing illegal trade in ivory and rhino. Shortly before he was murdered in 2018 at his home in nearby Langata, Bradley-Martin attended a BBQ in Nairobi National Park, telling members of FoNNaP, I just wanted to show my support.

I hope you will salute his spirit and show your support of Kenya’s oldest national park by becoming a member of FoNNaP. Current membership is in the hundreds; it should be in the thousands.